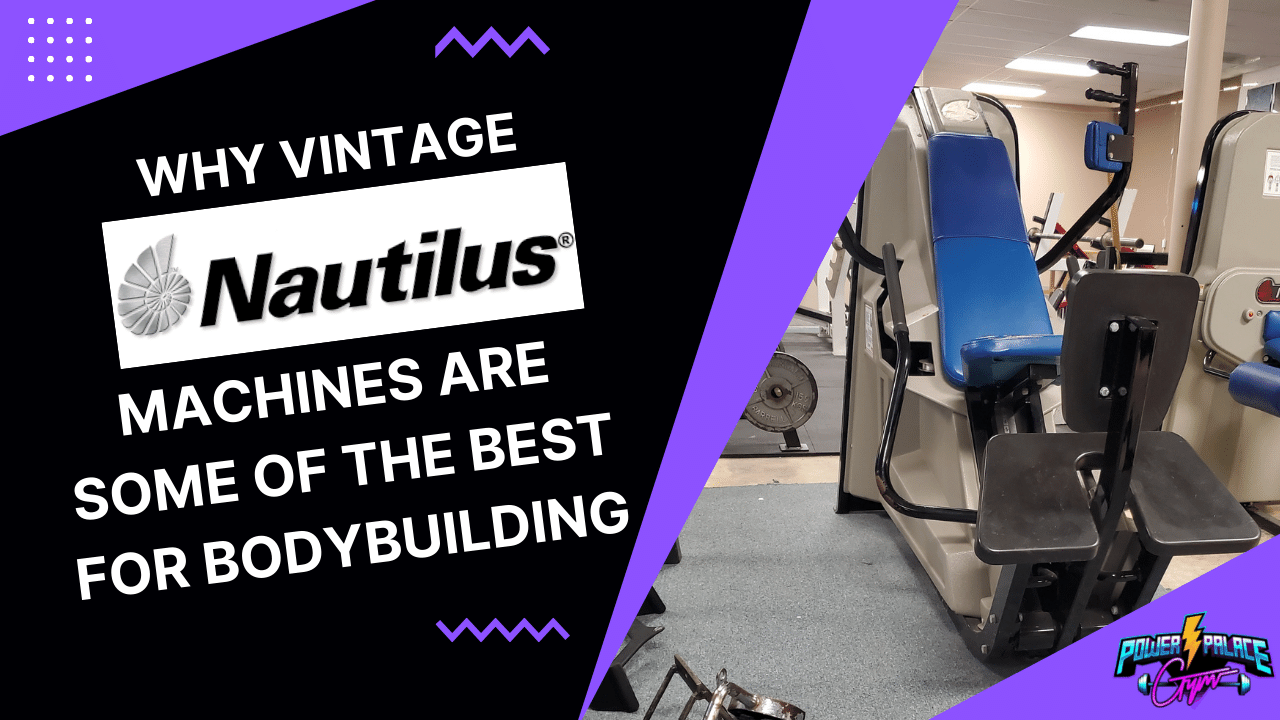 Power Palace Gym in Newberg, Oregon has a large offering of Nautilus Next Generation chain driven weightlifting machines, including the legendary Super Pullover. Produced between the late 1970s and early 80s, these machines employ a unique cam design developed by Arthur Jones in the 1960s. Each machine was expressly designed to provide variable resistance training during the movement of the exercise but in such a unique way that, although resistance increases and decreases through the motion of the machine, the resistance feels very consistent on the muscles being used in the entire movement.

Nautilus machines are designed to allow for the selection of any specific weight through an elliptical cam to affect variable resistance through a full range of motion. These machines were used for Arthur Jones’ preferred weight resistance training method, High Intensity Training (HIT), which has a strong emphasis on performing supersets with a negative rep phase in a circuit. During the 70s and early 80s, Nautilus was so popular that hundreds of Nautilus Fitness Center gyms operated throughout the United States. Nautilus Next Generation machines were predominantly used in these official gym centers.

This article by Core Health and Fitness describes the value of Jones’ unique cam design for his machines,

While it is true that traditional round pulley wheels provide consistent resistance in the pull, the reality is that the human body is used to pull the cable, which means the resistance doesn’t increase or decrease to match the movement of the muscles of the arms, back, legs, etc. in the movement. In comparison most Nautilus machines have the force of the resistance adjust to match the actual movement of the muscles you are trying to focus on for the particular exercise; for example, a Nautilus bicep curl machine increases resistance while you at the point of the movement where you are actually curling and lessens the resistance when your arm is fully extended — pulley and belt machines that don’t use Jones’ cam design require your forearms to be as strong as your bicep in order to get the full range of motion during the curl movement. Because most people’s forearms are not as strong as their biceps, this often results in many athletes not loading as much weight onto a bicep curl machine that is using a more traditional design for the exercise to be truly challenging the bicep. With the Nautilus bicep machine this becomes a non-issue, since the cam design ensures the straight arm, forearm dominant portion of a curl has less resistance than the actual bicep dominant portion of the curl movement.

Here is a short video that further discusses Arthur Jones approach to fitness and his ‘High Intensity Training’ model.

Arthur Jones designed his machines to fully exhaust the muscle groups, employing his medical knowledge to ensure smaller, weaker muscles got the workout they needed and the larger muscles also received their workout. This allowed the single machines to be able to fully exhaust large groups of muscles in a single set using the Nautilus Training System.

On the YouTube Channel STG Strength and Power they re-created the famous ‘Colorado Experiment’ Jones used to validate his methods, if you’re interested in seeing precisely how Arthur Jones intended his machines to be used.

After the sale of the Nautilus brand to Bowflex Inc. in the early 2000s, Bowflex changed its name to Nautilus Inc. and released new commercial gym machines under the brand that used Kevlar belt driven pulleys or cables. The company also owns the brands Modern Movement, Nautilus, Octane Fitness, Schwinn Fitness and Universal Gym Equipment. Many Nautilus machines sold today actually employ a Universal design, instead of the original Arthur Jones’ designs, as it is cheaper to produce Universal designs. The Nautilus brand name has also been slapped onto a wide range of home treadmills and other cardio equipment like ellipticals.

Today, the only machines produced by Nautilus Inc. that have any resemblance to the original machines designed by Arthur Jones are the Nitro series of Kevlar belt driven machines. Most people regard the original Jones designed machines employing chains and cams to be superior to the Nitro line, with nearly all of the major bodybuilding gyms having old-school Nautilus machines to offer their athletes. Most Mr. Olympias and Mr. Universes have trained on Arthur Jones’ equipment.

How Good Is the Original Nautilus Training Method?

Legendary bodybuilders loved the equipment; here is a video of Lou Ferrigno reminiscing about Nautilus equipment,

In an interview with three time Mr. Olympia winner Sergio Olivia in 2001 he talked about how he gained the largest size and strength increases he experienced during his career while training with Arthur Jones on Nautilus machines.

The best bodybuilding gyms in the world use vintage Nautilus machines because these are the machines the best bodybuilders in the world prefer for certain kinds of exercises. As an example here is 6 time Mr. Olympia Dorian Yates talking about how important the Super Pullover machine was to his back workouts.

Here is Dorian Yates in another interview talking about how much he loved old-school Nautilus equipment,

And here is John Meadows (holder of titles in IFBB Pro, CSCS and CISSN) demonstrating the use of a Pullover as part of his tutorial on how to build a strong back.

The one drawback to the Nautilus Training System is that your average gym goer doesn’t necessarily want to fully exhaust their muscles in a single set; essentially, most people just don’t want to work out as hard as Arthur Jones had designed his machines to be used. Couple this with the fact the all steel, made in the USA machines are heavy and expensive to manufacture, and the design of old school Nautilus equipment fell out of practice — nobody has made exercise machines the way old school Nautilus machines were made for well over 30 years. Today, many high-end weight training machines employ Kevlar belt systems, which while very excellent pieces of equipment (Power Palace Gym has several belt driven weight machines) just don’t hold a candle to what kind of workout is possible using Arthur Jones unique cam profiles.

While here at Power Palace Gym we don’t yet have enough Nautilus machines to allow our athletes to perform the full circuit envisioned by Arthur Jones, you can use substitute exercises with the equipment that we do have to fill in the gaps. For example, here is gym owner Carey Martell performing a modified version of the workout Sylvester Stallone used to prepare for filming Rocky IV, focusing on the chest and arms, that utilizes several Nautilus machine we have in our gym.

We intend to acquire several additional pieces of Next Generation machines in the coming months as we acquire more equipment. While we probably won’t have every machine in the line, we want to offer the best old school Nautilus machines to our club members so they can have a wide range of options for their workouts. Power Palace Gym also has several Hammer Strength Machines and other equipment, so look forward to a future article where we take a look at them and their history.

No comments to show.